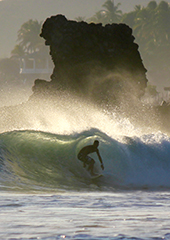 Surfers from around the world are just starting to discover the full surf potential of this beautiful tropical country. World class right point breaks, hollow beach breaks and challenging river mouths, El Salvador has it all. At Boca Olas Resort Villas in Playa El Tunco our experienced surf guides are here to introduce you to the best waves that El Salvador has to offer.

If you are a lifelong charger or just a beginner we can design a guided surf package that takes your specific needs into consideration. There is a wide variety of waves in close proximity of Boca Olas Resort Villas just waiting to be surfed. With some of the most consistent surf in Central America and some of the highest quality accommodations available, Boca Olas Resort Villas in El Tunco is the obvious choice for the discerning surf traveler.

Contact us today at tours@bocaolas.com with a little information about what type of guided surf tour experience you would like to have, and we can build your dream El Salvadorian surf vacation. If you want to learn more about some of the world class waves that surround Boca Olas please click the El Salvador Surf Guide tab below.